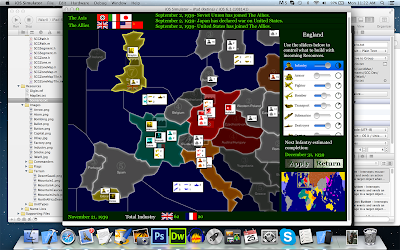 There's a pretty sophisticated resources production engine running under the hood here.  All your zones have a value, which determines how many resources they produce.  The resources are then automatically "shipped" to the closest factory zone.  The farther away the factory zone is, the more resources lost due to shipping inefficiency.  Shipping over sea zones if 5 times as costly as over land zones.  The most beautiful part of all this is that it's completely under the hood, and the player won't need to manage any of it.  However, the players who bother to learn the game will be able to benefit from their knowledge.  For example, prudent players can build factories in other zones to increase their production efficiency.  Of course, these factories themselves are items to produce, so they take some time to build.
Posted by LucidDion at 8:35 AM