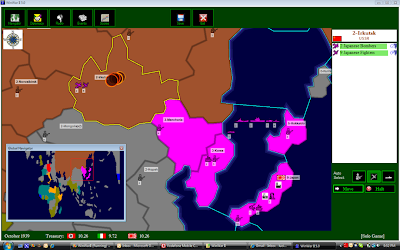 I completed two more features in WinWar II 5.0. Firstly, the Technological Research component is in place. To have your Nation conduct research, all you need to do is build Labs in one or more of your Zones. The Labs generate tech points behind the scenes, and you get periodical improvements during the game. If you place a Spy in another Nation's Zone that contains a Lab, you can also steal some of their tech points as they are generated.

There are Conventional Technology Levels for Land, Air, and Sea. When you advance a Level, the units you build for the particular Unit Class (land/air/sea) are 10% stronger in their attack and defense (and bombing if applicable) levels.

Radar
Allows you to build Radar installations in Zones that extend visibility.

Encryption
Gives you a chance of eavesdropping on private communications between other Players.

Rockets
Lets you build Rocket Launchers that can conduct Strategic Bombing in a target Zone in their range.

Atomic
Lets you build "Atomic" units such as an Atomic Bomber. Atomic attacks will devastate a Zone, reducing its Value, and possibly destroying Bases, Factories, Labs, etc. in the Zone, in addition to taking a large chunk out of the Funds of the Nation attacked.

I also completed the Strategic Bombing concept for the game. Certain Unit Types can be given the "Bombing" attribute which gives them Strategic Bombing capability. When these units are in an enemy Zone they will automatically conduct Strategic Bombing attacks periodically. The damage done is subtracted from the Funds of the Nation being attacked. Attacking high value Zones obviously does more damage.
Posted by LucidDion at 12:55 PM 2 comments: